Copies of my brand new album ‘Vanishing Act’ will be available at selected upcoming 2016 shows. The album was produced by Ian McCalman and in addition to myself, also features Adam Sutherland on fiddle, Bob Miller on double bass and William Archibald on percussion.

A full release is scheduled for January the 16th 2017, and a pre-order facility will be available on the website before that.

Exciting times, as always!! A Happy St Andrew’s Day to everyone from Rotterdam – :-).

On the anniversary of my birth I’m delighted to share with you all the official video for ‘You and I Must Remember Them’, once again filmed, produced and edited by the incomparable Simon P Biggs. Please click here and let us know your thoughts. SK x

As mentioned earlier, here is a video of the live interview and performance on Global TV.

More news soon, but in the meantime, thanks for taking the time to watch.

Just to let my Canadian friends and followers know that I shall be on Global TV as part of their morning news programme from Regina.

There is a link here, you do need to subscribe to view, but it is free to join, enjoy!

I’m unsure whether the content will be available to view ‘live’ outside of Canada but there will be a link posted soon afterwards.

I’m conscious I don’t check in here nearly as much as I should, and I will, of course, endeavour to do so more in the future.

I’m enjoying a period of seven weeks straight in my beloved Edinburgh, though this is not nearly as relaxing as I’ve initially made it sound. The Edinburgh Festival starts again tomorrow, and once again I shall be performing daily at the Royal Oak from between 1700 – 1800, tickets are available here.

My forthcoming album, recorded and produced once again by Ian McCalman is about to be mastered, whilst I’ve also been busy filming another video with Simon P Biggs. I have also squeezed in the time to record another album of instrumentals, a follow up to Estranged.

More extensive news on all these projects shall be coming soon, I assure you. For now, should you find yourselves in Edinburgh during the month of August, I’d be delighted if you would take the time to join me in the Royal Oak.

They shall represent the last Scottish concerts of 2016 for me, before I depart for Canada, Ireland, England, Germany, the Netherlands, Belgium & Switzerland to round the year off.

Thanks, as always, for reading, and I hope to see you some of you soon.

Apologies for my tardiness in posting this blog, but much has been happening in the musical world, more of which I can tell you now.

I should first alert you to the release by my good friend and fine fellow troubadour Paul Cherryseed, his new album entitled ‘The Story of Saint Anonymous’ is now available to purchase on iTunes. From a personal perspective, it is a wonderful honour to have both the area of Edinburgh in which I live immortalised in the song ‘Morningside Road’, and to have Paul and his excellent band perform a superb rendition of my song ‘The Bleeding Mile’, from my debut album ‘Carefree Prisoner’. If you have a moment, please investigate Paul’s work, you won’t be disappointed.

Exciting news for the autumn too, in that I shall be working with a very talented Amsterdam-based string quartet named ‘Quintessences’, and their brilliant arranger and conductor Michael Becker on a full live show of my music. It has long been an ambition of mine to perform live with a string quartet and to finally be realising this with Michael & Quintessences is most inspiring, to say the least! At present, we are in the early stages of planning the track listings, but I will bring further news of this collaboration as it develops, including, of course, the live performance dates in Amsterdam.

Closer to home, remember this?! Well, I’m delighted to announce that filming on a new video, once again with Simon P Biggs is set to commence in a couple of weeks, and it is hoped that this will be ready for the summer. This will feature one of the songs from The Last Car.

As those of you who follow me on Facebook will no doubt be aware, the majority of music has now been recorded for my next album, once again I’ve been working with legendary Scottish folk musician Ian McCalman. A few harmonies are still to be laid down, and a guitar part or two to be added, but we’re pretty much ready to enter the mixing stage and are well on schedule for an autumn 2017 release.

First tour of Spain & Catalonia to come in early May, along with a wee hometown appearance at Tradfest before an extended tour of Germany and Switzerland in late May/early June.

For now, I’m signing off to restring that resonator guitar!

Thanks for reading, as always.

This is just a short note to let you all know that the first concert of 2016 shall be at the Glasgow Royal Concert Hall on the 20th of January as part of the Scotia Nova project at Celtic Connections, to which I contributed a song entitled ‘So We Must Unite’.

Please see here to read about the project and purchase the accompanying CD and here to buy tickets to the concert itself.

Hoping to see you all somewhere on the road during 2016!

I was thrilled and honoured to have contributed a lead vocal to a beautiful song composed by Ian McCalman on a recent Greentrax album celebrating the life of the great Scottish painter John Bellany.

Thanks, as always, for reading, and I hope to see you somewhere on the road soon.

Just to let my Scottish friends and followers know that I was recently on STV as part of their festival coverage.

You do need an STV account to view, and to be resident in the Auld Country, but it is free to join, enjoy!

Thanks, as ever, for taking time to read this humble fingerpicking guitarist’s blog, it really is very kind of you.

I write from Riga, where two of the songs from my latest album ‘The Last Car’ were born, the title track ‘The Last Car’ & ‘When Will She Learn’ – it is strange to tread the old steps of creativity, but fascinating nonetheless.

The reaction to the album has been fantastic, and I’m greatly appreciative of all those who have bought or taken the time to listen to it, as well as those who have given the album wider exposure, including (amongst others) Iain Anderson, Frank Hennessy, Roddy Hart, Cherrie McIlwaine, The Durbervilles at the BBC, Jim Gellatly & and to The Glasgow Herald for this excellent review

In other news, Simon P Biggs & I are delighted to announce that the video for ‘A City Beautiful’ has been nominated for the Edinburgh International Film Festival Short Film Challenge & shall be shown on the Big Screen, which will be a huge thrill for us both.  If you haven’t yet seen it, here’s the link!

Have you heard the one about the Scottish fingerpicking guitarist in the German charts?!  You will soon…..courtesy of DJ Cosmin, a leading Bavarian DJ, an unusual collaboration has lead to a release of ours entitled ‘Reality’ chart 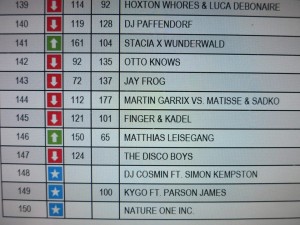 ing in Germany.  Don’t believe me…..here’s the evidence! And you can download the track here.

And last, but not least, those residing in Auld Reekie, or visiting our fine Capital City during the Edinburgh Festival, please come along and see my brand new show, featuring many songs from ‘The Last Car’, fresh, for the first time live!  This is the official link for tickets.

Word has it a certain 1987 Fylde Othello guitar may be making an appearance……..

Hope to see you on the road somewhere soon, thanks as always for checking in.